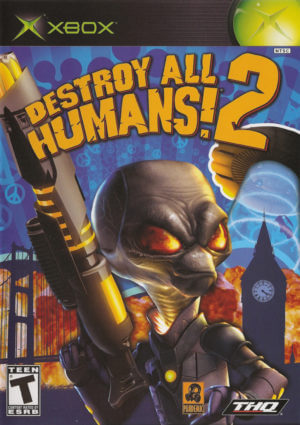 Destroy All Humans! is a series of highly entertaining games set in the world in 1950 and added elements of fiction to develop the game. This series is famous for allowing the player to control Crypto in destroying the entire human race with everything he has. In the second game of the series, Destroy All Humans! 2 will have new gameplay and improved graphics to give players a unique experience. In the game, it will introduce new locations, new features, and many new functions in the gameplay for players to explore and experience.

Crypto is a shortened name of a clone of the original introduced in the first game. And the game has a well-known storyline from the first game, from which players will find similarities both in the game through gameplay and the world. Players will have more options in destroying people, and there are many new things to entertain with them. The most striking thing in this game is the ability to disguise by snatching people with special equipment. Players can use human bodies to move around the city and complete a series of objectives. If the player successfully captures the bodies of the important people in each country, then they can sabotage everything by making choices.

The graphics of the two games are built with a 3D environment, and the second game has improved graphics and is superior to the first game. Visual effects will be improved, become more eye-catching and lively than its previous game, thereby giving players new experiences. Besides, Crypto itself can now use many new features, and players will also have many things to entertain while roaming the city. Interestingly, the game will now feature co-op for players to complete the story with friends or to explore around the cities to enjoy mini-games and activities.

Destroy All Humans! 2 is considered one of the most entertaining games ever released on platforms like PlayStation 2 and Xbox. It not only gives players a lot of entertainment but also gives players many attractive features as well as graphics for players to have a great experience with the game.