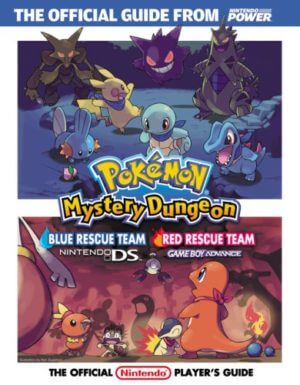 The Pokémon is a franchise with countless series, and that made the game famous until now. The publisher of Nintendo exclusively owns the Pokémon universe, and even appears only on certain handheld games from Nintendo. The universe inside Pokémon was formed by the appearance of creatures called Pokémon and has long lived with humans. One of the series in this vast universe called Pokémon Mystery Dungeon with much different gameplay. And today, I will introduce you to one of the popular parts of this series, called Blue Rescue Team and Red Rescue Team.

Compared to the gamePokémon gameplay similarities they have with each other, but roguelike gameplay styles will be first introduced in this series. That means its gameplay is entirely different from other series, and players will be introduced to a completely new gameplay mechanism, along with its special features. However, the game will retain the turn-based combat element, but the story and its features are new and give players a lot of new experiences.

Players will start with a character that has been turned into a Pokémon, and the player can select one of the sixteen Pokémon to start the game. The game then offers ten options for players to decide which Pokémon will become a companion throughout the game. The core of the game is mission-based, with many jobs that can be received from different ways, such as on the bulletin board, requested by mail, etc. The variety of work and Pokémon is what makes this game so popular, along with roguelike gameplay to create whole new experience compared to other Pokémon games.

The player’s job will take place in randomly designed dungeons. The player’s goal is to complete the job or to find an exit to advance to the next room. In the dungeon, there will be many wild Pokémon residing and ready to battle with the player’s team. The game has a turn-based battle mechanism, and the Pokémon will battle with four individual skills. The game will have a simple battle interface, along with a selection mechanism using the touchscreen. The battle consumes the player’s physical strength, so during the trip, the player needs food, food can be found in the dungeon, or brought in advance.

The gameplay of the game also has many exciting things for players to explore, and in the Pokémon Mystery Dungeon series will also give players many different experiences and emotions thanks to its storyline. Every installment in this series has long playing hours, ensuring that players are always entertained.