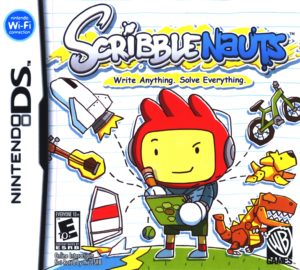 Scribblenauts is an original game released exclusively on the Nintendo DS platform. It was later widely distributed across many different platforms. It is a game that uses puzzle gameplay combined with many factors to create the best experience for the player. What’s even more impressive is that it has many different versions, with a variety of plot and gameplay.

The game is a side-scrolling game with a design almost identical to the Nintendo DS stylus, with a D-pad control mechanism to moving easily. Players will control Maxwell to collect all Starites to complete the challenge and proceed further. For Nintendo DS, players will control Maxwell using the touchscreen, or simply tap on any object along the way. Maxwell will move to the place where it has touched or pick up the specified items, and sometimes some items will appear other options for players to interact. This game has gameplay designed to allow players to interact with the environment more easily, from which progress is challenged by completing puzzles.

The adventure of the player will go through countless different challenges, each of which is a puzzle that players can solve in many different ways. The interesting thing about this game is Maxwell’s ability, which is summon anything just by writing the name of the object. The game will feature a touchscreen writing feature, allowing players to summon any item to reach out of reach objects. Things that the player summons can interact with existing objects, such as sticking a piece of meat on a stick while riding a Raptor. Because of this feature, the game became popular and loved by many people, even future challenges will be more difficult, and the player must have a rich imagination to overcome. Summoned objects range among animals, weapons, forces of nature, famous people (both fictional and real), vehicles, household objects, easter eggs of the development team, and even internet memes. Of course, the game will have some restrictions imposed to protect the player and its policy.

In addition to owning massive gameplay with top-notch physical interaction, players will also enjoy a meaningful, emotional, and humorous storyline of Maxwell. His journey is far from over, and that can only be completed with the help of the player.