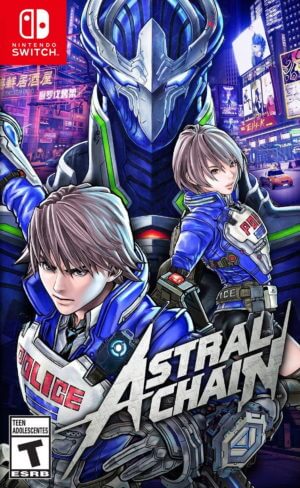 Though it features elements from several other genres, Astral Chain is primarily an action game with clever mechanics, a compelling story, and a pleasant sense of humor that never detracts from the experience.

The few survivors of a great worldwide tragedy band together in a future megacity. As a member of a special police task force armed with sentient weaponry called Legions, you now must defend them from extraterrestrial invaders.

PlatinumGames’ latest action game has you controlling both the protagonist and a Legion at once to pull off flashy combinations. You may instantly switch Legions to experiment with new play styles and access new powers.

The remaining vestiges of humanity depend on you, and to preserve the world, you must uncover its evil side. Investigate crimes in a future cyberpunk city and see the dwindling human race’s desperate battle for survival.

You’ll meet regular folks, interrogate suspects, and work with members of your task force while you battle chimeras from another realm. These inquiries will call for using Legions’ skills, such as tracking a scent to find a missing person or subduing violent offenders.

The Astral Plane, the realm from whence the chimeras enter, sits beyond the final human stronghold. As you traverse its convoluted hallways, you must utilize your Legions to solve environmental riddles and unveil the secrets of this unique universe.

To convey its tale, the semi-open world Action RPG ASTRAL CHAIN guides players through a series of cases. The main character leaves the police station to investigate and resolve problems or crimes in other parts of the city and then returns there. Each level has its ranking and score system, and based on how successfully it was cleared; different bonuses will be awarded after the class. Director Takahisa Taura told Polygon that the game’s aesthetic crosses Bayonetta’s linearity and NieR: Automata’s environment.

As a Neuron agent, the hero is tasked with fending against chimeras while also solving crimes and conducting investigations. The Legion can provide a hand in several ways regarding warfare or studies.

Elliot Davies
Gets to near the end of the download and keeps stopping saying server problem ?. This has happened with a few games recently and leaving a comment so that you know you may have a server issue maybe ?.
Reply - December 21, 2020