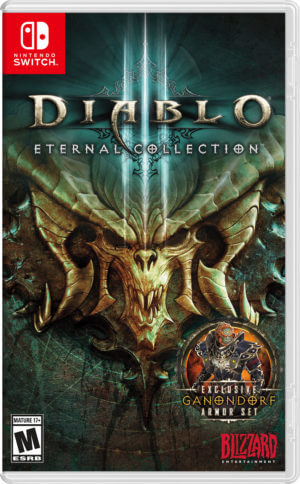 The original Diablo III, the highly regarded Reaper of Souls expansion, the Rise of the Necromancer pack, all content updates and console-specific features, a variety of extra items that are only available for the Nintendo Switch, and a lifetime’s worth of adventure are all included in Diablo III: Eternal Collection.

The Nintendo Switch version of Diablo III: Eternal Collection makes the most of the console’s adaptability and versatility by providing players with a wide variety of intuitive and highly responsive controller setup choices.

You can slay your way, regardless of whether you want to use dual-wielding Joy-Cons, sitting elbow-to-elbow on the sofa with your buddies using a single Joy-Con apiece, or join the conflict equipped with a Pro Controller. All of these methods will work.

There is room for up to four people to participate in massive cooperative crusades to purge Sanctuary. Players may accomplish this by sitting next to one another in front of a single Nintendo Switch screen or wirelessly joining several consoles.