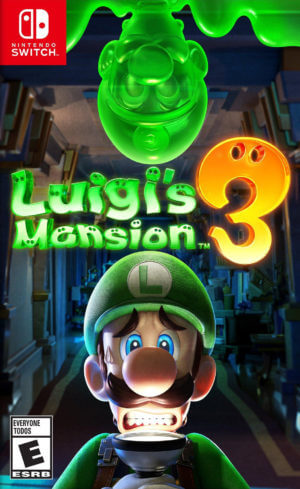 The third game in the Luigi’s Mansion series is titled “Luigi’s Mansion 3.” Players take control of Luigi once more as he attempts to save his companions from the cursed hotel’s resident ghosts. The game has new ghost-catching skills, a doppelganger sidekick named Gooigi, and local and online multiplayer options that allow for cooperative and competitive play.

Upon accepting an invitation to a five-star hotel, Luigi and his pals Mario and his companions set off on a holiday of a lifetime. But when King Boo reveals it was all a plot to kidnap Mario and his buddies, his dream rapidly turns into a nightmare. Luigi, ever the hesitant and cowardly hero, is again helped by the ever-helpful Professor E. Gadd as he bravely ventures up and down the dangerous levels of the now-foreboding hotel.

Use the enhanced Poltergust G-00 to smash and explode through the ghosts’ defenses, or call upon your all-green doppelganger, Gooigi, to aid you. You may play as either Luigi or Gooigi, or you can split the control with a friend.

In ScareScraper mode, players compete against the clock to complete tasks over many levels. Up to eight players on four Nintendo Switches can compete in this mode either online or in a local LAN (other games required).