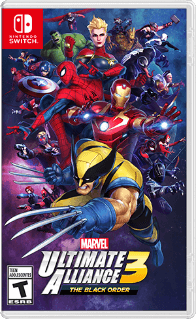 The MARVEL ULTIMATE ALLIANCE series is back after a decade with a brand-new action role-playing game (RPG) for the Nintendo SwitchTM system.

Put together a squad of Marvel’s finest from various characters, including the Avengers, the Guardians of the Galaxy, the X-Men, and many more!

The galaxy needs your help from you and your friends to stop the crazy cosmic dictator Thanos and his brutal warmasters, The Black Order, from destroying everything.

To prevent Thanos and the Black Order from unleashing cosmic destruction, heroes and villains team up in this new narrative and race across the Marvel Universe to collect the Infinity Stones.

Throughout the perilous journey to defeat Thanos, beloved characters and landmarks like Avengers Tower and the X-Mansion are brought into hazardous and unexpected contact with one another.

The first in the series to use an over-the-shoulder “Heroic Camera,” players may get a more intimate feel for the action, whether solo or with a group of four players.

You may invite a buddy to join your team by passing them a Joy-ConTM controller or asking them to play locally over local Wi-Fi. Additional Joy-Con controllers (available separately) allow for cooperative gaming for up to four people. Players may form their own “Ultimate Alliance” whenever they choose, thanks to the game’s drop-in/drop-out co-op features.