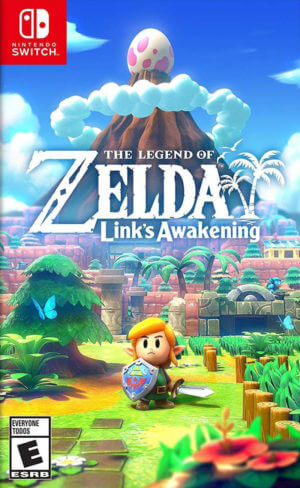 This is a complete port of the original Game Boy game to the Nintendo Switch.

The Legend of Zelda: Link’s Awakening opens with Link being washed up on Koholint Island following a violent storm. The villagers of Mabe Village, led by Marin and her dad Tarin, come to his aid and return him to the valley. Not long later, an owl appears and tasks Link with finding the eight instruments of the Sirens and waking the Wind Fish, who has been dormant in a massive egg high in the mountains.

Link, the game’s mute protagonist, travels through various environments to accomplish his mission, including a mountain range, a forest, grasslands, a castle, a lake, the sea, the desert, and caves.

Link’s Awakening is unique compared to other events in the Legend of Zelda series because it has nothing to do with Hyrule, Ganon, or the Triforce. There is one brief reference to Princess Zelda.

It’s no surprise that Link’s Awakening is a top-down Legend of Zelda game. As Link explores the game world of Koholint Island, he delves into eight dungeons, collecting one item in each that is usually necessary to fight the dungeon king. Link will be rewarded with an Instrument of the Sirens after defeating the final boss. The party must complete side quests between dungeons to earn a scroll to unlock the next level.

Link’s Awakening was the first game in the Zelda series to include several essential components that became series staples. The player was forced to push a button to raise their shield for the first time in any of the games in the series. Also, it offered the use of two items at once, neither of which had to be a sword or shield. This made it possible to create puzzles in which players had to mix the skills of two objects.