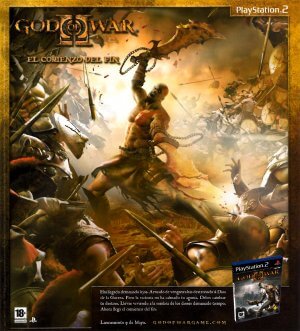 Kratos, the ruthless warrior, makes his comeback as the new vindictive God of War. The story of retribution takes center stage once more in the second installment of this series. After defeating Ares and becoming a god himself, Kratos reveals himself to be a god who is even more ruthless and power-hungry than Ares was at any point in time. In the end, he discovers that he has been betrayed, and all of his almighty powers and skills are taken away from him. Kratos embarks on yet another journey of epic proportions, this time in search of the Sisters of Fate, in the hopes of changing his fate and regaining his power—a feat that has never before been accomplished by a mortal or a god.

In the same vein as its predecessor, God of War II is an action game that also features aspects of platforming and puzzle-solving. Kratos must continue to use the Blades of Chaos in order to cut apart his adversaries, as well as any other gods, heroes, or monsters from Greek mythology that stand in the way of his gaining vengeance and power. As was the case before, Kratos will receive a greater quantity of red orbs for use in his upgrades proportional to the level of the combination that is achieved by killing an adversary. Kratos’ arsenal of spells includes some that make use of the blue orbs in some capacity. Some players may recognize them from the game before, while others will be introduced for the first time in this sequel and its narrative.

In addition to the combat and some light puzzle-solving, the sequel features some rail-based flying levels in which Kratos soars through the air on the back of either a Pegasus or a gryphon. These levels are optional. In addition, he gains mastery of a number of additional fighting and puzzle-solving abilities throughout the course of the game, such as the capacity to halt the passage of time, for instance.

A second disc that contains a variety of special materials, such as cut levels, the voices of God of War II, the musical score, and a documentary about the process of bringing the game to life, is included with the purchase of the game.