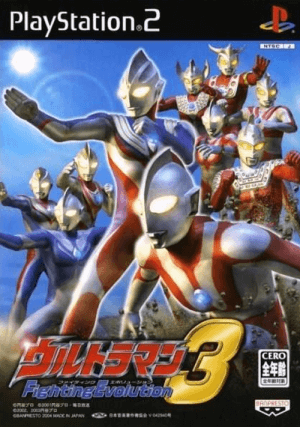 The video game Ultraman Fighting Evolution 3 was developed by Banpresto, launched on PlayStation 2 on December 2nd, 2004, and published by Banpresto.

Ultraman Fighting Evolution 3 is widely regarded as the finest Ultraman Fighting game to date, and with good reason: it has iconic episodes from the Ultraman TV series and allows players to take control of Ultraman and go through the stories on their own. In addition to the story mode, players may engage in Player versus Player (PVP) and Player versus Monster (PVM) battles.

Due to the inclusion of Ultraman 80, this Ultraman Fighting Evolution game is the first in the series to focus on Ultraman and Ultra Monsters from the Heisei era.

The player’s overall score in the game is determined by their performance on each level; rankings range from D (the lowest) to S (the greatest). Each level has its own time and health requirements that, once met, provide a promotion. An additional two unique needs must be met to earn an S Rank. The number of particular tasks in many stages exceeds two, suggesting that there are often several strategies for achieving an S rank in each phase. If you’re good enough at sure of these jobs, you can get an S rank without having to do any other particular tasks or wait for your health and time to replenish.