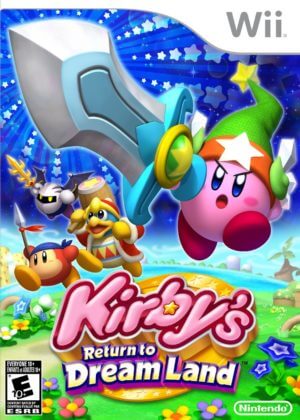 Kirby Goes Back to Dream Land and the Living Room

Kirby and his friends are back in an adventure that will please both longtime fans and people who have never played Kirby before. When an alien spaceship crashes in the otherwise peaceful land of Pop Star, its pieces are scattered all over the land. Players must help Kirby find the ship’s parts and return the aliens to their planet. But this time, he’s not on his own. Up to three more players can join the fun at any time and play as Meta Knight, King Dedede, or Waddle Dee to help Kirby on his quest.

Sword: Kirby dons a green cap and wields a sword.

Kirby wears a jester’s hat and has a magic wand that he can use to shoot energy from.

Whip: Kirby can lasso enemies and wears a cowboy hat.

Leaf: There are a lot of leaves all around Kirby.