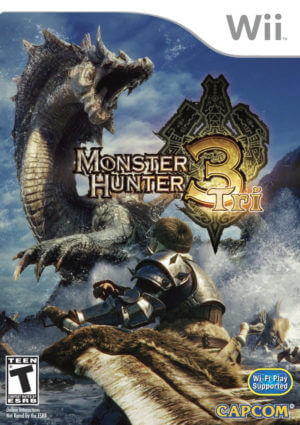 Monster Hunter Tri, one of the most breathtakingly gorgeous games ever created for the Wii, presents a dynamic ecosystem in which people live side by side with spectacular animals that wander both the dry land and a brand-new sub-aqua habitat, a first for the series.

With the option of split-screen mode, two players can hunt together, or with the game’s unique online Wi-Fi mode, up to four hunters can create a team. Living the life of a hunter need not be a lonesome affair. Even lonely players won’t have to take on Monster Hunter Tri’s difficult tasks by themselves because Cha-Cha, an AI hunting partner, will be by their side and provide essential assistance. The hunters will have access to brand-new tools, armor sets, and weaponry as they start out on the most grandiose Monster Hunter expedition ever.

“The Monster Hunter franchise is undeniably popular in Japan, and the Day 1 shipment number indicates that the arrival of Monster Hunter Tri on Wii will be another significant hit for the series,” said Laurent Fischer, Managing Director, Marketing & PR, Nintendo of Europe. So that the Wii audience over here may also enjoy the thrill of the hunt, we are really thrilled that Capcom is bringing this game to Europe.

Visitors visiting this month’s GamesCom, which runs from August 19 through August 23, in Cologne, Germany, will be the first to play a localized version of the game on Capcom’s booth when it debuts to a western audience. GamesCom attendees may play the same game that caught last year’s Tokyo Game Expo by storm, with lines so long they nearly shut down the show; eager players waited over two hours to play.