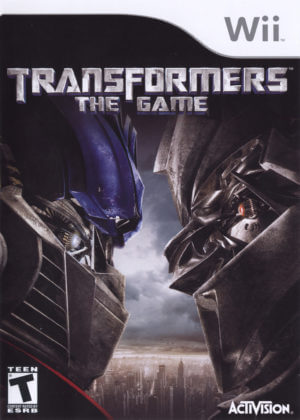 Playing the video game TRANSFORMERS allows players to decide whether to protect Earth as AUTOBOTS or destroy it as DECEPTICONS, therefore controlling the course of the struggle for it. The unstoppable strength and enormous magnitude of the players’ favorite ROBOTS IN DISGUISE, including BUMBLEBEE, BARRICADE, and others, will also be felt by the players.

Gamers have the option of joining the AUTOBOTS in preserving our planet or the DECEPTICONS in destroying it as the TRANSFORMERS robot war approaches Earth. The outcome of the world is up to the players in duel campaigns.

MORE THAN MEETS THE EYE – Suddenly transform into a powerful car, fighter jet, or helicopter from a larger-than-life robot. The characters’ multiple forms are fully exploited during seamless changes that leave foes in the dust or improve players’ battle tactics with a variety of options in both vehicle and robot modes.

The World Is Your Playground – Players can use the objects as weapons or crush, overturn, and demolish any structure or vehicle that gets in their way. It is up to the player to choose how to make the most of their environment while playing.

Freedom of Choice: Players have the option of taking on the roles of characters such as OPTIMUS PRIME, MEGATRON, IRONHIDE, STARSCREAM, BUMBLEBEE, and a host of others, allowing them to feel the vast size, distinctive powers, and overwhelming strength of an army from the TRANSFORMERS universe.

Variety of Combat – In head-to-head combat, players use melee weapons and special moves that are specific to each TRANSFORMERS robot while also reflecting the character, scale, weight, and power of each robot in the series. There are many different projective weapons available in the game’s ranged combat that are made to eliminate adversaries at a distance.