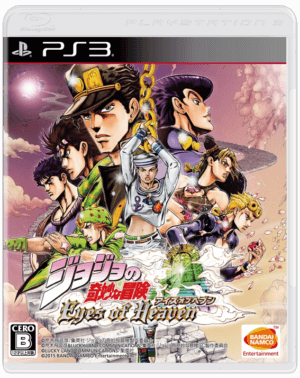 The story, directed by Hirohiko Araki, takes place shortly after the events of Stardust Crusaders. Jotaro Kujo and his companions had just slain the wicked vampire DIO when they are suddenly ambushed by friends and opponents who have either vanished or killed along the road. Then they are approached by a young Robert E. O. Speedwagon, who holds a portion of the Saint’s Corpse, allowing him to travel through time and space and combat the evil force that has taken over the others. He leads Jotaro and his allies on a journey through time, space, and alternate universes to prevent another iteration of DIO and his disciple, Father Enrico Pucci, from obtaining the remaining pieces of the Saint’s Corpse in DIO’s quest to be free of the Joestar family and achieve his own personal heaven.

[3] Characters from all eight parts of JoJo’s Bizarre Adventure appear as Jotaro goes through time to visit his ancestor Jonathan Joestar, his grandfather Joseph Joestar while still in his youth, his younger uncle Josuke Higashikata, DIO’s son but still a Joestar Giorno Giovanna, and his own daughter Jolyne Cujoh, while Jonathan and Josuke encounter their alternate world counterparts, the jockey Joh