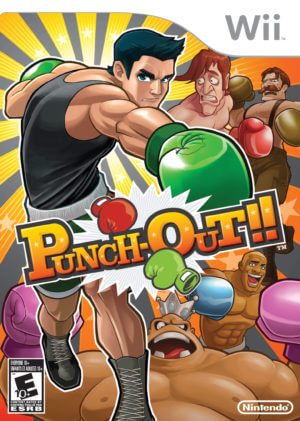 After 15 years away, one of the biggest names in boxing is back. Grab a Wii Remote and a Nunchuk controller and step back into the ring with a modern version of the classic game Punch-Out!!

Little Mac has returned! In a modern version of the series, everyone’s favorite underdog from the 1980s joins the best of the original Punch-Out!! cast. Names like Glass Joe, King Hippo, and trainer Doc Louis will be there. These boxers come to life again in cell-shaded 3-D, with funny fighting animations and backstories that capture all the fun and style of the original Punch-Out!! games.

Because the Wii controls are sensitive to movement, when a player throws a punch, Little Mac throws a punch, too. You can also control hooks and jabs by combining motion control with the movement of the control stick. Everyone can play because the Wii Remote and Nunchuk controllers can turn real punches into on-screen ones. You can also play the game with old-school NES controls by turning the Wii Remote on its side.

Characters: Little Mac, Glass Joe, King Hippo, Doc Louis, Von Kaiser, and the new kid, Disco Kid, are characters. Little Mac can go into the ring with a total of 13 opponents. Twelve of them are from previous games in the Punch-Out!! series.

Special powers/weapons/moves/features: Players can get special “Star Punches” that let Little Mac take more Health from his opponent with a single punch. Players can now use more than one star in a single punch to make it stronger.

Fans of the NES version and serious gamers will be glad to see that Punch-Out!! using the original layout of the NES controller. You can throw hooks and jabs or dodge with the 1 and 2 buttons and the cross pad.