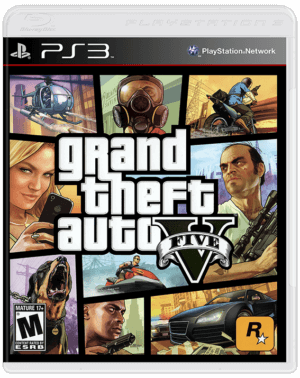 Role-playing adventure games have become a trend in the world market, and these games are always an open-world style for players to explore the world as well as entertainment. There have been many open-world adventure games, but the one that stands out and sticks to reality the most is Grand Theft Auto V. It is a game that is highly regarded for its gameplay, story, and features, as well as the level of entertainment it brings to everyone. Moreover, it uses realistic 3D graphics, perfect lighting effects, and character designs, all to a high degree, far beyond GTA IV in terms of visual. Of course, it also supports multiplayer features with loads of exciting things for everyone to entertain and perform thrilling tasks with friends.

Grand Theft Auto V is an adventure action game that allows players to control up to three different characters through a third perspective. The multi-character feature was first introduced in this game, and it allows players to experience each person’s story as well as explore the world through multiple locations. The variety of characters will lead to a variety of quests for each character, and players can complete quests without order. If the player participates in quests that require the arrival of three characters, the player can switch between different perspectives to complete each objective. Of course, when players change their perspective, the remaining characters will be controlled by AI.

The world of GTA V is considered larger than all the previous games in the series, so players will have more opportunities to explore and enjoy its activities. The mission system of each character will be diverse and vibrant, and players will enjoy moments such as shooting, racing, underground missions, looting, vandalism, and countless other things. In other words, this game allows players to perform whatever actions they want, which will be influenced by the cops and other gangs.

Besides, the variety of vehicles and weapons will play an essential role in the player’s plot progress. Players can carry multiple weapons and freely change them anytime, anywhere. Weapons can also be used while moving on vehicles or shot from behind the cover. Vehicles will constantly appear around the player, and some special vehicles can be owned or received from quest rewards. GTA V is a new generation role-playing game, and it allows players to do whatever they want without limits, like a new life.