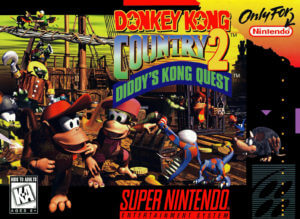 “Donkey Kong” is one of the famous games from the early days of the newly developed game industry. And it has become one of the most famous names, but it is a pity that the image of this character is a villain. Not a superhero but a villain who kidnapped the princess to detain. But later on, there was a series of games that made this character a hero rather than a villain. The series is Donkey Kong Country – a series that was first launched on the SNES platform. When the game was just released, the first part of the game gained the attention of many players because of a new image of Donkey Kong. Because of the success of the first game, the game’s creative team was allowed to continue producing the second part of the game. And not long after that, the second part of the game called Donkey Kong Country 2: Diddy’s Kong Quest was born for players to experience. This game will bring players a completely new story and transfer a new journey for players to explore.

Donkey Kong is a hero of this game in defeating King K. Rool to get back the bananas that have been stolen. In the first part of the game, Donkey Kong and Diddy Kong together set out to find the lost bananas. When everything was successful, suddenly Donkey Kong was kidnapped by King K. Rool and made things worse. So this time, Diddy Kong and his girlfriend Dixie Kong had to leave to rescue Donkey Kong. This time the main character of the game is not Donkey anymore, but this time that person is Diddy, another member for players to experience. The context of the game has also been changed to Crocodile Isle to bring novelty.

In this game, there is a feature that has been improved compared to the previous game; that is, it has gained more enemies for players to fight. They are divided into two categories depending on the player’s living environment for the player to explore. On land, the enemies that players will face as Kremlings, mice, bees, and many other animals. In the water, players will encounter things like pufferfish, stingrays, and piranhas.