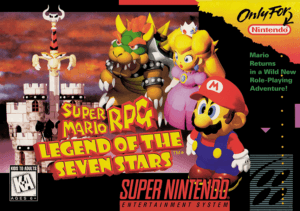 JRPG is one of the most popular genres in Japan because there are so many such games being born for players to experience. These games are so popular that they have formed a unique feature, so they have been given a unique name to distinguish easily. There are many famous RPG games that players can choose from, such as Final Fantasy and many other names. But have you ever seen Mario become the protagonist of an RPG game? This may sound strange as both of them seem to be not so much related to one another. Mario has his series and has its unique nature, so it is difficult to combine with RPG. However, in 1996, Square released the game Super Mario RPG: Legend of the Seven Stars of the RPG genre for players to experience. This game was developed for release on the SNES platform, and many players quickly appreciated it. Thanks to its characteristics, this game soon became one of the names considered to be the greatest of the SNES platform.

Mario is on his way to rescue Princess Toadstool from King Bowser’s castle. Once Mario reaches King Bowser’s castle, a battle between Mario and King Bowser takes place to compete for Princess Toadstool. While the battle was taking place, suddenly, a huge sword named Exor had fallen from the sky to make everything broken. Mario, the princess, and everyone was taken to a different place, and so the journey to find out the reason. But this journey is not easy because the player will have to face a lot of different monsters to complete the game. Besides, the player must search for seven-star fragments to restore this path.

In his journey, the player initially controls Mario to fight the enemy. But then the player will meet other characters to build a squad. There is a maximum of five characters that the player can meet, but the player only uses three people in a team, Mario and two others. Each character has a different power for the player to use; for example, Geno has high attack damage, Toadstool recovers HP.