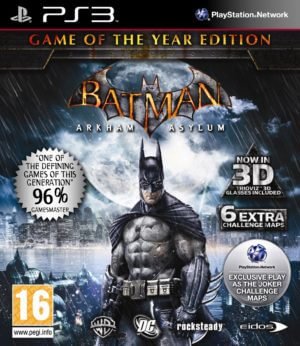 Batman: Arkham Asylum returns with a Game of the Year Edition on Xbox 360 and Playstation 3 that features more content and, for the first time on home consoles, Trioviz 3D vision. Batman: Arkham Asylum was released to tremendous praise in 2009 and has been dubbed the “best license game ever” and a “must buy” on gaming websites and publications. It’s been praised for delivering a compelling blend of action, stealth, and puzzle-solving gameplay, all tied together by a dark original storyline written by five-time Emmy winner Paul Dini and supported by a famous cast of voice actors, including Mark Hamill as The Joker and Kevin Conroy as Batman.