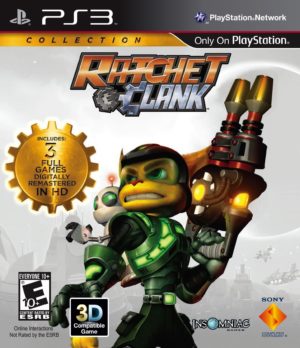 Two PlayStation heroes are returning to relive their first three adventures on the PS3, which have been beautifully recreated in High Definition.

Load up on outrageous weaponry and amazing gear, then display your prowess while pursuing PlayStation Network trophies.

The characters in the Ratchet & Clank Trilogy are:

Two PlayStation heroes are returning to relive their first three adventures on the PS3, which have been beautifully recreated in High Definition.

Ratchet & Clank: Set in a richly drawn futuristic sci-fi environment, Ratchet & Clank delivers a blend of action-platforming, shooting, and exploring that revolves around the purchase and usage of high-tech gadgets and weaponry as well as exploration, puzzle-solving, and battle. This game is the one to own since you get to blow stuff up, despite the fact that there is a massive adventure, a ton of adversaries, and an arsenal of weapons and tools. The size of your weapons doesn’t matter; what matters is how many you have and, even more importantly, how you employ them.

Locked & Loaded, from Ratchet & Clank 2: Megacorp’s CEO, Mr. Smiles, has created a terrific new item! He intends to market the “Protopet,” a really adorable critter, to every home in the cosmos. Ratchet and Clank are hired by Mr. Smiles to assist in recovering the prototype after it is stolen. They gradually come to understand that perhaps the thief isn’t always at fault and that perhaps the Protopet isn’t quite as adorable and innocent as it first appears to be. Everything is going to go horribly wrong, and only Ratchet and Clank can fix it and identify the true culprits.