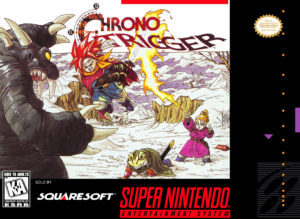 Square Enix is ​​one of the game developers who has released many famous games for players to experience. Among them are the names that are not unfamiliar to players such as Dragon Quests or Final Fantasy. Talented game makers create all of them, and many players love it. But the fathers of both series have come together to launch a game, which is Chrono Trigger.That is Hironobu Sakaguchi – the father of the Final Fantasy series and Yuji Horii – the father of the Dragon Quest series. Not only that, but the author of the famous Dragon Ball comic series, Akira Toriyama, contributed to the development of this game. Just by looking at the names, the player is enough to guess the amount of these games. Since its launch on the SNES platform, it has become a wave to sweep through all and become one of SNES’s most successful games. This game quickly has the strength to compare with its seniors and even a bit more.

The element of time travel is one of the factors that play a significant role in attracting players to the game. The time when the game was released, the time travel theme was used to launch a game that was quite vague and rarely used. But with the combination of three talented men, this game has succeeded in making it a reality. The game’s creative team created interesting stories and characters to bring them into different timelines for players to experience. It can be said that this is the perfect time travel game that players can find to play.

Like many games at the same time, this game still has a turn-based combat mechanism for players to experience. But in many other games, the player is free to decide which squad to start the battle. In this game, it is not like that; the player does not have control over the character that they will automatically move to fight. Both monsters and heroes automatically move to a new location to attack enemies.