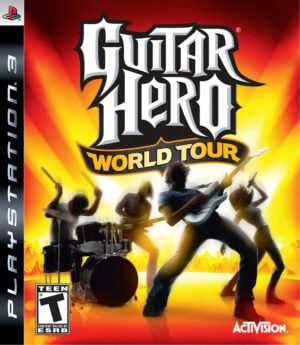 The fourth main game in the Guitar Hero: World Tour introduces a significant update to the premise. Following the introduction of Rock Band, which expanded on the Guitar Hero concept by adding more instruments, World Tour includes these as well, allowing players to perform together as a real band at the same time. In addition to the guitar, which served as the primary peripheral in previous versions, the bundled edition of the game includes a microphone for vocal sections and drums for percussion. The guitar tracks are split up for the lead and bass, much like in the previous game. The words and voice pitch are shown near the top of the screen, while the bottom part is divided up for bass guitar, lead guitar, and drums, each with its own set of notes that must be hit to play the part correctly.