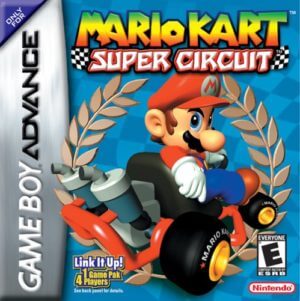 Mario Kart: Super Circuit is a kart racing game released by Nintendo for the Game Boy Advance in 2001. This game uses popular characters in the Super Mario Worlds universe for character and gameplay development. The game also belongs to the arcade racing genre, so players will often race against AI in the short-time races. With the arrival of the karts, the race will become more funny and exciting for players; it will also bring friendliness for all ages because of its graphics.

Mario Kart: Super Circuit has gameplay developed in arcade racing style, so the time for each race is short, but it has a lot of fun as well as features for players. The race will feature up to eight characters with a variety of looks and karts, all of which share the same speed, acceleration, and vehicle features. Things only difference is the skill of the player control, and the track will be designed to make it diverse with many corners and many boosters along the way. Players have one task, which is winning the race in the shortest time possible. However, players also need to face all challenges from other riders in the race.

Mario Kart is rated as one of the most entertaining games because of what players can do with their opponents while racing. On the track will appear blocks with random items, players can store up to two items to use. The variety of items will lead to a variety of uses. For offensive items, it will automatically aim at the targets ahead to shorten the distance, and items such as defenses or traps will be used as obstacles to others. If the player uses the item at the right time, other riders will have many problems controlling the vehicle. Players just need to throw items reasonably to be able to achieve the championship in the race.

In addition to using items, players must also show off skilled racing skills such as drift or dodge traps from other riders. On the way, there will be some booster for players to speed up in a short time, and the bends will need drift skills to shorten the time. Mario Kart: Super Circuit is also considered as one of the best GBA games in the entertainment of the crowd, and it always makes the player satisfied with its features and gameplay.