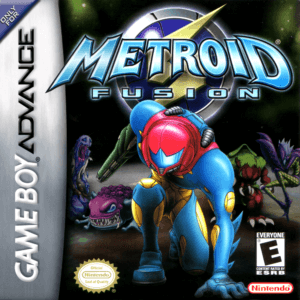 Metroid Fusion is an action game developed by Nintendo for the Game Boy Advance in 2002. This game is in the same universe as the Super Metroid game released in 1994. Similarly, the player plays Samus Aran, a hunter who is tasked with investigating a space station flooded by monsters. Besides, Metroid is a series that uses side-scrolling to develop gameplay and storylines so that players will witness more action scenes than Samus Aran’s talk.

The gameplay of Metroid Fusion is a side-scrolling adventure action built in a sci-fi universe. Players will control Samus Aran to overcome many challenges such as shooting, jumping, solving puzzles, and many other things in its story. The game is mission-based gameplay, so players need to complete the current task before starting with the next story. Each mission will take place in different locations, along with a variety of monsters, weapons, and features. The player must also know how to use Samus’s abilities reasonably because she is no different from a mobile arsenal and exciting accessories.

The world inside the game is built in an open-ended style so that people can move between different areas by elevator. On the way, there will be many doors to limit an area, and most doors can be opened by destroying them. Some doors can only be opened once the player completes the plot or reach the point. Fusion is an adventure action game, but it pays great attention to developing the plot and how to guide players through important locations. The game will have Navigation rooms, helping players identify the direction needed to proceed with the story.

The game will add new features that make the action-adventure element even more impressive, like grab ledges or climbing ladders. At some points, players need to solve puzzles by interacting with the environment to continue with the story. The environment will become diverse and rich, along with unique design and divided into many different floors for players to regularly use the jump action. Of course, the rewards for solving puzzles will be huge, like power-ups that make Samus Aran stronger or other items. Players can receive power-ups through a variety of ways, such as destroying monsters or defeating bosses scattered throughout the world.