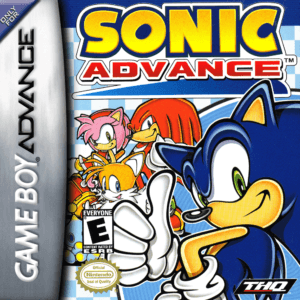 Sonic Advance is a platform adventure game developed by Dimps and first released on Game Boy Advance. It was also the first game of the Sonic The Hedgehog series developed on Nintendo’s gaming console. The plot of the game tells the journey of Sonic, Knuckles, Tails, and Amy with the task of stopping Dr. Eggman from taking over the world. The game has a world built in a unique, ideal way, creating many different terrains for players to explore and experience. Moreover, its graphics are also appreciated by the community, with vivid colors and eye-catching character designs.

Sonic Advance is a side-scrolling platform game, and small levels connect the world in this game. Each level has terrain, paths, and many interesting places that are not linked to each other. In other words, the levels are a messy design, but they connect to each other to create a unique path, and they will interrupt themselves to distract the player from their destination. Players will control the available characters in this game to overcome all challenges. Each character has a unique skill compared to other characters, thereby making its gameplay more diverse and more attractive depending on the character that the player chooses.

In each level, the path will appear many obstacles such as traps, cliffs, and even broken segments for players to overcome. But along the way, there will be collectible items to accumulate in the player’s score. The terrain is cluttered, but it makes each skill of each character stand out more when used. Sonic can achieve sound speed every time he rolls; Knuckles can climb walls; Tails can fly thanks to her tail. With a variety of characters, it will make the gameplay more interesting when players can use each character’s skills most effectively. Each world will have a changing landscape, even the paths will become more cluttered and players will spend time while finding their way. But the game will have a bonus if the player collects everything at every level.

The battle of Dr. Eggman will mark the end of the game, and the player must use every skill he has to defeat him. Sonic Advance is an interesting game, it brings a lot of experience for players and new gameplay compared to other games. That game is also considered as one of the best games for GBA.