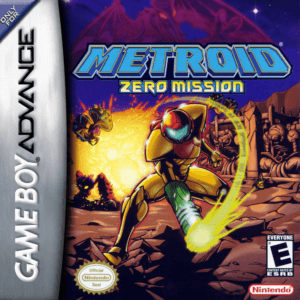 Metroid: Zero Mission is an action-adventure game released by Nintendo for Game Boy Advance. That game is a remake of the first game in the Metroid series, and the player will play as bounty hunter Samus Aran. Similar to previous games, the game has similar gameplay and focuses on exploring, and the game will have a perfect storyline for players to fully enjoy. The plot of the game will revolve around Samus Aran set foot on the planet Zebes and learn about the true intentions of the Space Pirates. But instead, she finds a bigger secret, and that will let the players discover and experience for themselves.

Zero Mission is a side-scrolling adventure action game, and the planet Zebes is designed in an open-ended style for players to explore around. The game has a simple control mechanism, but it has many different combos for players to activate some special skills of Samus Aran. Along the way, players will overcome countless challenges, and they are a combination of combat, puzzles, and the environment. Players have a simple task, which is to explore each area to find Power-ups and improve the power of Samus Aran. Of course, all areas are connected by elevators or tunnels, which makes it easier to change the scene and give players a lot of experience.

Zero Mission is a remake of the first game, so Samus Aran doesn’t have Power Suit like the later games. However, she has more exciting possibilities, and even her movements will become smoother, allowing players to interact with the environment better. The game is a remake, so it will have improved graphics, visual effects, and sound to give the player a better experience. Players can now search for hidden items or new weapons in story mode. However, the game will also add new enemies, new challenges, and even mini-bosses scattered all over Zebes. The game will also support players with the Navigation room feature, helping players identify the next places to complete the story.

If you are looking for an action game with unique gameplay, Metroid: Zero Mission will be a perfect choice for you. Join Samus Aran and overcome countless thrilling, climactic, and challenging challenges throughout the trip.