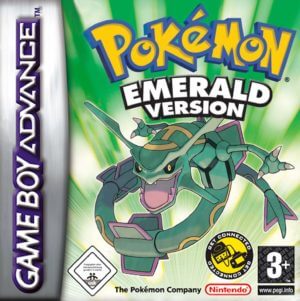 Pokémon Emerald is a role-playing game released by Nintendo for the Game Boy Advance in 2004. It is the third-generation games, an upgraded version of Ruby and Sapphire, along with Improvements in gameplay, graphics, and features. In the Pokémon universe, none of the games are related to the storyline, but most of them share a common development storyline and worlds. In Emerald, players will still start in Hoenn lands, similar to previous games, but this time the goal will change, and players will witness more action than talking.

The gameplay of the game is similar to the previous games, and players will control the character through an overhead view and go everywhere within a limited capacity. However, its plot plays a huge role in expanding the area and new features for players to enjoy. In this game’s story, players will still have to collect powerful Pokémon and prevent evil organizations from destroying the Pokémon world. But this time, the game will have a higher difficulty level than the previous games, and players need to defeat many other targets before moving on to the final goal. Hoenn is a large island, and it is designed in an open-world style, so players can freely move around and do whatever they want.

Players can encounter Pokémon randomly if they go into the tall grass, and the surrounding environment will determine the properties of the Pokémon. The variety of Pokémon and habitat is one of the hallmarks of the Pokémon series, and players love the feeling of catching strange Pokémon in their inventory. The combat mechanism is still the same as the previous games; players will control up to two Pokemon in the turn-based mechanism. Each pokémon has its characteristics, and that will make the player’s tactics more diverse and richer when they can combine many things in battle. Of course, players can still use items to support Pokémon, but their use will be limited.

Emerald is also story-based gameplay so that players will be taken to new lands and unlocked new features while proceeding the story. The diversity of Pokemon, an engaging and climactic storyline, and attractive features are some of the factors that make Emerald popular.