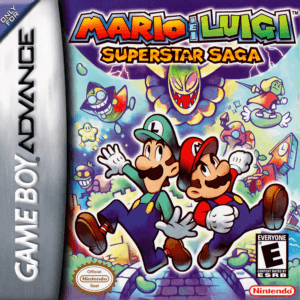 Mario & Luigi: Superstar Saga is an RPG game released by Nintendo for the Game Boy Advance. Moreover, this is also the first game of the role-playing game series Mario & Luigi.This game is very different from other Super Mario games, and the player does not have to control Mario or Luigi in a platforming world. Instead, players will have to combine the ability of these two brothers to be able to overcome the challenges or puzzles scattered throughout the world of Mario & Luigi: Superstar Saga.

Mario & Luigi: Superstar Saga is the first role-playing adventure game in the Mario universe, and the game will emphasize the combat element throughout the journey. The plot of the game begins when Cackletta, the main antagonist of the game, with the help of his assistant, Fawful, steal Princess Peach’s voice. The player has a unique mission, which is to defeat Cackletta and regain the voice of Princess Peach along with Mario and Luigi. Different from the rest of Mario, the game applies story-based gameplay so that the player will be led through many places by its story. Players will travel through many kingdoms, battling many enemies, facing many challenges, and more on their travels.

The gameplay developed in-depth and has many exciting things for players on the path in the story. Players can control both characters simultaneously, from which to work together to overcome complex challenges. In the story, players will also unlock the special abilities of the two brothers, thereby making gameplay wider and diverse in terms of control mechanisms and interaction with the environment. Each time the player fights an enemy on the Overworld, the player can attack initially with a large amount of damage, and enter the combat state. The game uses turn-based combat, so players will have more choices in developing tactics for each situation.

The game will also have many surprises for players in the world, the plot, and the gameplay for players to fully enjoy. The game uses simple graphics, compatible with the Game Boy Advance, and it also has a simple control mechanism, helping players to have a great experience than ever before. If you are looking for a Mario game with new gameplay and exciting features, Mario & Luigi: Superstar Saga will be a great choice.