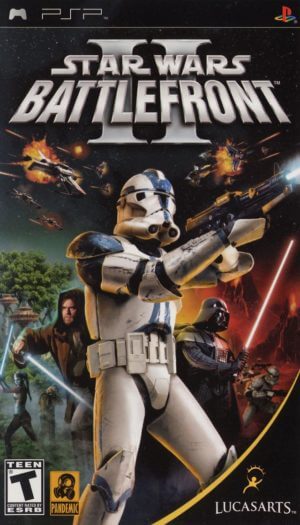 Star Wars is one of the most popular films because of the story and the theme of the game so that people can experience it. This movie has become one of the most popular and influential names for human culture. Not just a movie, but it has also been turned animation or games for players to experience. If mentioning the game related to Star Wars, it is impossible not to mention a name that was once a craze in the market, which is Star Wars Battlefront II. The game is made for platforms like PlayStation 2, PlayStation Portable, Microsoft Windows, and Xbox. In any version, the game is always successful in bringing benefits to the publisher. Especially on the PSP platform, a handle console platform is top-rated, and this game on that platform has become one of the greatest names. This game is the second part of the series, and it has acquired the essence of the first part and added new elements to create a much better game.

When coming to the game, the player will have to go through a lot of battles to be able to become the winner. When participating in a fight, the player needs to command his army to destroy the enemy base to win. In the game, there will be six types of soldiers for the player to choose from, including four basic types: infantry, heavy weapons, snipers, and combat engineer. The remaining two classes will be unlocked when the player meets certain conditions in the game. Players need to command their troops to attack enemy bases to destroy them and win. But this journey will not be easy; players will have to confront the army of enemies and kill them to succeed.

Hero Control:
Every army needs a leader to lead that army to victory, and that person is you. Players will be allowed the game to control one of the many iconic characters of the Star Wars series to be the head. There are many famous characters for players to choose from, such as Luke, Darth Vader, and many other characters. Players select their favorite character to be able to start the game.